Arcade games grown to be one of the immediate ways of relieving ourselves from stress. Sometimes, we even go to amusement parks to play our favorite arcade games or even take a ride on the thrilling activities.

This type of entertainment that arcade games can give is perfect as there’s no need for big fields to play one. 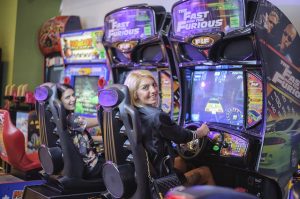 Basically, arcade games can be played in public places as well as entertainment joints with some could be played directly from your home.

The extreme selection of games to pick from is what making the games so appealing and bring loads of entertainment. The term arcade actually refers to a passage or alley. As a result, arcade games are typically played out in arcades. Nonetheless, the games are everywhere. With the advancement in technology, you can play them in public places with few given a reboot and could be downloaded and played to your smartphones.

Regardless where these arcade games are positioned, it is guaranteed to bring a different level of entertainment; be it in airports, campuses, shopping malls, supermarkets, movie house, casinos, bars and even restaurants. So if you want to play, there are plenty of places that you could go to experience it.